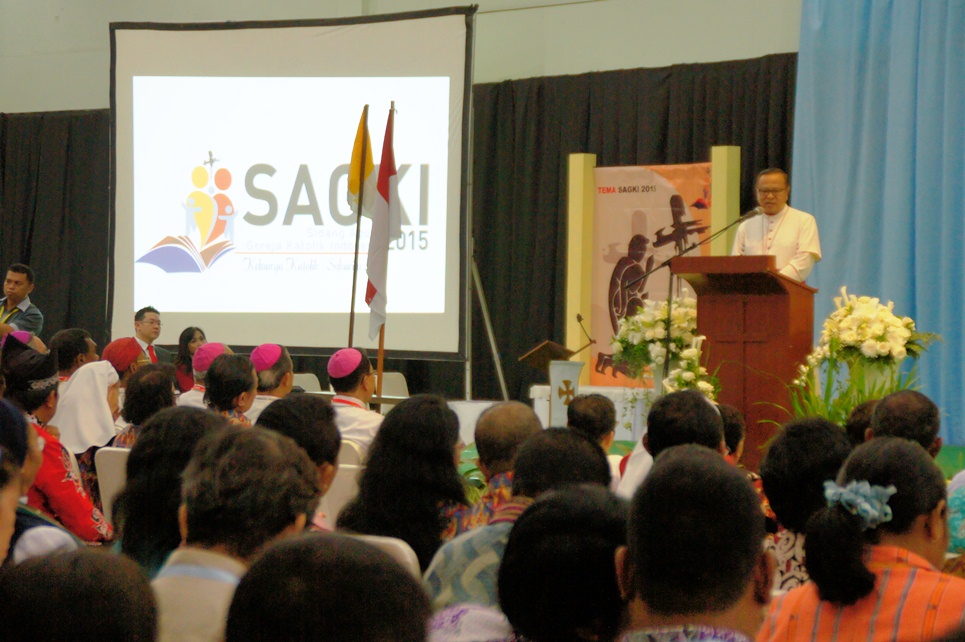 THE National Conference of the Catholic Church in Indonesia (SAGKI 2015) begins today on the ‘vocation and mission of the family in a plural society’. Bishops, priests and lay people will address issues like divorce, migrant workers and abandoned children. For the Archbishop of Jakarta, the Catholic family must bear witness to a “quality of life from which everyone can learn.”

Jakarta (AsiaNews) – Mgr. Suharyo Ignatius, Archbishop of Jakarta, said that the purpose of the upcoming National Conference of the Catholic Church in Indonesia (Sidang Agung Gereja Katolik Indonesia, SAGKI 2015) is to discuss the family in order to share “common concerns and hopes about its problems. This way the Catholic Church in Indonesia can bear witness to the goodness of the Christian proposal to live in society for the good of the nation.”

The congress, organised by the Bishops’ Conference of Indonesia (Konferensi Waligereja Indonesia, KWI), begins today and will end on Friday, 6 November. This year’s topic is ‘The Catholic family: The Gospel of hope. Its vocation and mission in the Church and in the plural society of Indonesia’.

Some 500 people are expected at the event, including ten delegates from each diocese and members of Catholic organisations that work with families.

The SAGKI 2015 will focus “especially on social problems that the Church has to address,” said Mgrs. Suharyo at a press conference, “like divorce, migrant workers and parents who cannot educate their children because they do not have time, with serious consequences for children.”

What Indonesia needs, according to the prelate, “is the common decency of Catholic families who have to become not only a model for society, but also offer a quality of life from which everyone can learn.”

Indonesia has an urgent need for people of integrity. “This is what we want to do with a national conference,” the archbishop explained, “where bishops, priests, religious and lay Catholics come together for the benefit of the whole nation “.

Speaking at the press conference, Mgrs. Fransiskus Kopong Kung, president of the Episcopal Commission on the family, said that “through SAGKI 2015, the Indonesian Church wants to express its gratitude to all Catholic families for their vital contribution. This is the moment of truth, where bishops, priests and religious have to learn by listening to their voices, concerns, hopes and dreams.”

Mgrs Suharyo and Kung have just returned to Indonesia after attending the Synod on the Family in the Vatican.

According to Father Hibertus Hartono MSF, president of SAGKI 2015, the conference “was designed in accordance with the Church’s main concerns with the family, which was recently discussed at the Extraordinary Synod, the Family Day in Philadelphia and the Synod of Bishops that ended last week. The KWI has not considered the topic for far too long,” he noted.